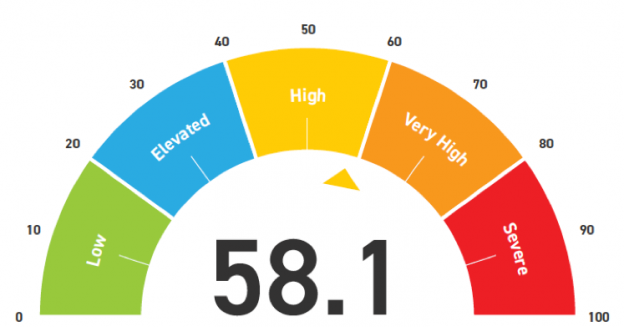 A Q2 2019 survey of 1035 Small and Medium Enterprises rated the current Cyber Threat index as “High”.
We’ve found this survey interesting and relevant as its offers really simple way of expressing how SMEs view the current threat of a cyber-attack, and the companies in the surveys are broadly similar to our customers. This is a quarterly survey run by one of our Partners, AppRiver in the USA. The AppRiver Cyberthreat Index for Business was developed by independent firms Idea Loft and Equation Research, in consultation with the University of West Florida Center for Cybersecurity, using survey data collected online in April 2019.

An interesting take way from this survey is that larger SMEs (with 150 – 250 staff) are more wary and aware of cyber threats than their smaller counterparts. This despite the fact that larger SMEs spend more and have a higher level of cyber preparedness than smaller SMEs. This consistent pattern suggests smaller SMEs could be underestimating their real cyberthreat risks. Reports of real threat incidents indicate cybercriminals do not discriminate; they are just as prolific in targeting smaller businesses – garnering smaller gains but with higher frequency of success – as they do large enterprises.

CYBER THREATS ARE TOP OF MIND

Actual attacks are believed to be prevalent:

Most SMEs do not believe they can escape a successful attack unharmed:

Majority of SMEs believe cybercriminals have the upper hand:

A related study by Datto (another partner of ours) found the initial ransom demand is typically not what breaks the bank. Instead, the aftermath and cost of downtime are the crippling factors. The ransom demanded from SMEs averages at $4,300 while the average cost of downtime related to a ransomware attack is ten times that at around $46,800.

The use of social media apps and websites at the workplace or on a business device concerns SME leaders and IT decision makers as a cybersecurity risk, according to 84% of all respondents surveyed. That figures increases to 89% among the larger SME community.

Among those concerned, 77% say they are most worried about employees’ use of Facebook as a security risk, followed by 21% who say the same about Twitter (each respondent was given the option to name none, one, or two social media platform that concerns them most as a cybersecurity risk).

Among SMEs surveyed that use an outside managed service provider (MSP) or technology consultant:

Threat prevention was chosen as the service they need most from their MSPs in all key SME industry verticals surveyed, with the exception of the legal sector, where SMEs say they most value MSP’s support in network monitoring and visibility, ahead of threat prevention.
Among the 1,035 total SME executives and IT decision makers surveyed in Q2, 22% (228 respondents) say they do not use an external managed service provider.