Macintosh Classic – a blast from the past 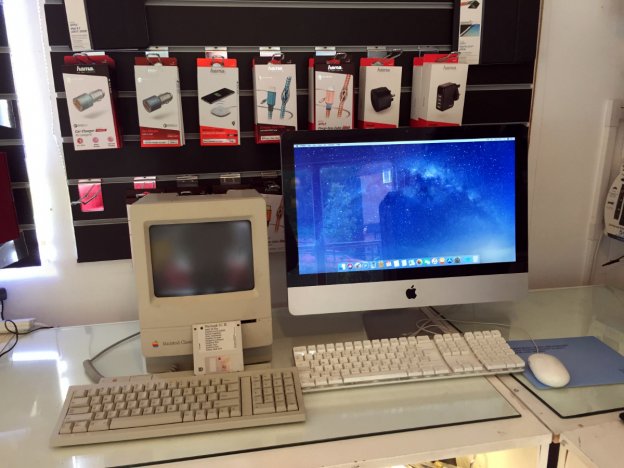 How many of you remember this little beauty from Apple in the early 1990s – the Apple Macintosh Classic – the one on the left if you have any doubt? We recently recovered this one from a client as they were upgrading their computers – but I’m not sure how long its been in service!
It was Apple’s first Macintosh to sell for less than $1,000. It “boasted” a 9in monochrome screen and a mighty 4M of RAM. Apple’s decision to not update the Classic with newer technology such as a 68010 CPU, higher RAM capacity or color display resulted in criticism from reviewers, with Macworld describing it as having “nothing to gloat about beyond its low price” and “unexceptional”. But, it ensured compatibility with the Mac’s by-then healthy software base as well as enabled it to fit the lower price Apple intended for it. Nevertheless, the Classic featured several improvements over the aging Macintosh Plus, which it replaced as Apple’s low-end Mac computer. It was up to 25 percent faster than the Plus and included an Apple SuperDrive 3.5-inch (9 cm) floppy disk drive as standard.  Words thanks to Wikipedia.

Who remembers floppy drives? Seems ages ago since I had so much fun with them but my grandchildren know nothing about them.

We also have two refurbished laptops for sale: